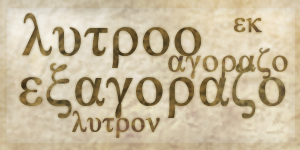 Lutroo and exagorazo appear in various forms throughout the New Testament and the Greek translation of the Hebrew Bible to describe either God as redeemer or a man who buys back a kinsman from slavery, or land that has passed out of the family’s possession. The root of lutroo, luo, means to loosen, unbind, or untie. The root of exagorazo comes from the word for marketplace, agorazo. Each instance of either word intends a transaction where the patriarch of a family trades something valuable for a possession or person who rightfully belongs to the family by natural means.

A person would be naturally born into a family and therefore be tied to that family for all times by blood relations. Land was likewise tied to Israeli family tribes. When God led Moses and the Israelites into the promised land, he divided up the land among the twelve tribes and set down rules which would ensure the land always belonged to its tribe. Land could be sold if a family fell on hard times. A person could be sold into slavery as well. But, every fiftieth year, under Mosaic law, all hebrew slaves were set free and all land returned to its original family.

We were originally created by God, in His image, but after the fall, we became slaves of the world. Each of us now begins our life as a creature of the world, who has a natural right to be redeemed to become a creature of our Father, our ultimate patriarch, God. It is by the price paid of Jesus’ blood that the transaction is accomplished. When we accept, believe, place our faith, and put our trust in Jesus, He becomes our advocate with our holy Father. We get back in the family, where we naturally belong. 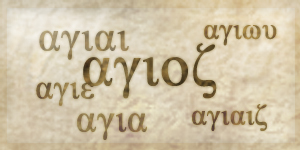 Hagios, in various forms, appears 235 times in the bible as an adjective describing something or someone which is set apart by or for God, holy, and sacred.

The word is found in the gospels of the New Testament to describe the Holy Spirit, the holy city, the holy land, a holy place, holy angels, holy covenant, the holy one of God, and that which is holy.

We also see hagios used as the word “saint.”

Saints in the new testament must not be confused with the traditional modern connotation of the pious in heaven to whom miracles are attributed. When the apostles wrote of saints, they wrote of living people serving God in the first-century cities and towns of the Mediterranean world.

Now it came to pass, as Peter went through all parts of the country, that he also came down to the saints who dwelt in Lydda. – Acts 9:32

To all who are in Rome, beloved of God, called to be saints: Grace to you and peace from God our Father and the Lord Jesus Christ. -Romans 1:7

When Hellenistic scribes translated the Hebrew Old Testament into Greek for distribution throughout the known world, they also used hagios in reference to the people of God.

Then the kingdom and dominion, And the greatness of the kingdoms under the whole heaven, Shall be given to the people, the saints of the Most High. His kingdom is an everlasting kingdom, And all dominions shall serve and obey Him.’  -Daniel 7:26-28

He guards the paths of justice, And preserves the way of His saints. -Proverbs 2:8

Saints, therefore are people who have been called to God, to devote their lives to His will, who walk the earth in life, who make of themselves and others disciples of the Lord.

We know that by simply giving our lives to God, by asking Jesus to dwell in our hearts in the form of the Holy Spirit, we too become hagios, holy. We become saints of our God. What a wondrous and awesome gift we have been granted! What a joyous responsibility accompanies that gift as well: to be the light of Jesus Christ in the world, illuminating the path to the kingdom of God. I guarantee that there is no task in earth as fulfilling and enriching as giving your life to God through the saving grace of His son, Jesus.